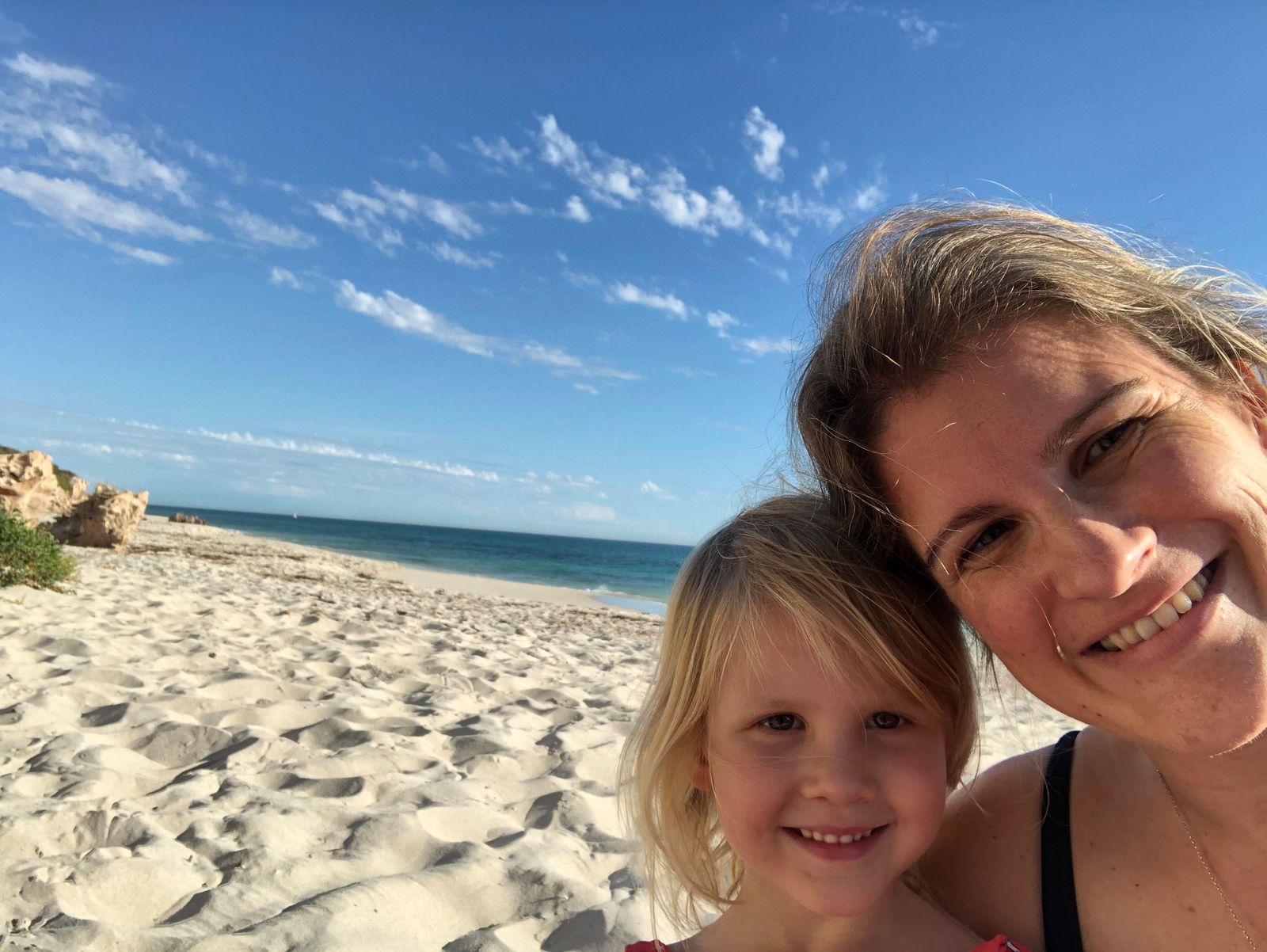 Helen and Rosalyn normally attend All Saints
I don’t feel any less busy because I’m still working but from home. One thing I am aware of though is that I am less busy in terms of driving around to ever so many different places and extra-curricular activities. As a result I have been able to get more domestic jobs done at home, start cooking and baking again, and reading, more than I had time for before.
In the lockdown world we have all been experiencing I’m getting most enjoyment from spending time at home with my daughter and time at the beautiful beach which is just a 10-minute walk away from our house. Not having to commute to work has meant I do get to spend more time with Rosalyn and our two dogs, Poppy who is now 15 and Sandy, 7. Poppy and Sandy are so happy to have me working from home and have several baskets to choose from in my office and fight over who gets the one closest to me. They will be sad when I work at the university again for more days of the week.
I am a keen swimmer but with the pools closed, I have taken up running again, and try and get out several days a week when Rosalyn is at school. I have two routes that I like to go, one is 3km and one is 5km, they start from my house and the first kilometre takes me down to the esplanade, then I run along the coastal path for a few kilometres and then back round up to my house. I also have a halfway stop at Queenscliff Park and look out to sea and feel very lucky to be where I am in the world.
Rosalyn and I have planted some flower beds and also some beetroots. All the other vegetable seeds were sold out! It’s been great watching those grow over the last 2 months, and we nearly do have some flowers.
Family and friends are so important, and it is hard being separated. It’s hard also with family in the UK that we do not know when they will be able to visit. We write letters to friends in many places around the world (well, Rosalyn draws the pictures to accompany them) and enjoy walking to the post box to send those, as well as catching up in the digital environment. We have also enjoyed receiving real post from friends near and far.
I have been catching up on my reading which has included several of Elly Griffiths’ novels (archaeology/history/detective), a number of books about the history of education in WA and educational pioneers, and I have been reading Penelope Lively and Helen Creswell children’s stories to Rosalyn (which all contain timeslip elements, with children from the present (being the 1960s-80s) finding their way in various ways into the past). As part of my work at Edith Cowan University I have been digitising oral histories collected in the late 1970s and 1980s, and annual, public and professorial lectures hosted by ECU in the 1990s. I found that Dr Norman Swan gave the ECU public lecture in 1992, "Health: A Tale of Two Centuries". Having seen him on the television and heard him on the radio almost constantly since corona virus hit our shores, I was intrigued to find his talk in the ECU archives.
Another public lecture, delivered in 1994, was "What Are we doing to the World’s Environment: The View from Space", given by Richard "Dick" Underwood. He was the chief engineer on the production of the first topographic maps of the moon. He was the first person to view every photograph from the Gemini, Apollo, Skylab, Apollo-Soyuz and the first 23 space shuttle missions. He also provided technical training to every astronaut who went into space in the twentieth century. In the opening few minutes of his speech Dick explains that astronauts can’t actually see stars when they’re in space, it doesn’t look like it does for us looking up from earth, and he said, that "Sometimes when I look at these space photographs, I wonder if planet earth will go on forever", this was in context of all the pollution he can see in the photographs. This really got me thinking about different perspectives, and about even though we feel so spread out all over the world, and that we are separated from loved ones, that at the same time our planet is such a tiny part in a vast universe, and that with modern technology we can stay connected (and by staying home we’ve reduced pollution).